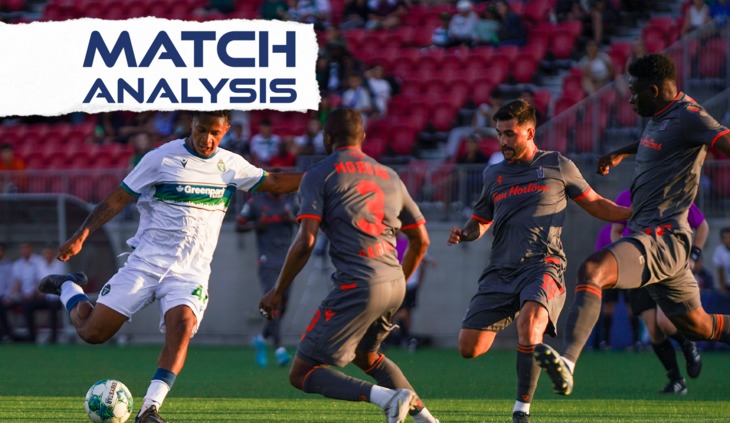 Match in a minute or less

Forge FC won a big Derby 905 against York United 2-0 at York Lions Stadium on Friday night, demanding revenge for a 1-0 defeat in their first meeting in early May. Tristan Borges scored with a deflected long-range strike in the first half, while Woobens Pacius put the game to bed with a second-half goal less than a minute after entering the pitch.

With the win, Forge moves up to third in the Canadian Premier League standings, just four points behind league leaders Cavalry FC. York, meanwhile, are now winless in nine and sit just a single point clear of bottom-placed FC Edmonton.

Forge shows off different offensive looks to kickstart the attack

After being held scoreless in back-to-back games for the first time this year without speaking in front of their home crowd, Forge came into this game on a mission to finally make a success of their forays into the final third.

Forge’s attacking woes have mostly come this year against clubs that sat down and forced Hamilton’s side to break them. Expecting more of the same from York today, they came equipped with a plan of attack that ultimately paid off.

“We’ve seen a trend lately with teams sitting a bit deeper on top of us, so we wanted to try and find the space behind the opponent a bit quicker and maybe that would open up that space behind or the second ball coming into midfield, which would maybe give us an easier way to attack and I think we accomplished that in a lot of situations in the first half, and those second balls also gave us opportunities for some of those longer shots.

Forge put those long-range efforts to good use during the match. They managed seven efforts from outside the box in 90 minutes, including a long-range strike from Kyle Bekker that forced a brilliant save from Niko Giantsopoulos, and the deflected goal scored by Tristan Borges.

A shot from Tristan Borges takes a deflection and @ForgeFCHamilton take a 1-0 lead on the road 🔨#CPLCan | 📺: @onesoccerpic.twitter.com/dLayRNxRTy

Another aspect of York United’s game plan that Forge quickly highlighted was the fact that young debutant Ronan Kratt was starting on the same left flank as Max Ferrari. Knowing that Ferrari was not a natural back, Smyrniotis quickly made it clear to his players that he wanted them to attack that flank and see if they could exploit that inexperience.

It’s not very often that Kyle Bekker’s No.10 appears red on the substitution board, especially when Forge is 11 days away from their next game and only a goal up. But it was the bold move Smryniotis opted to make in the 75th minute in a triple substitution that also saw Emery Welshman and Terran Campbell eliminated.

Woobens Pacius, Noah Jensen and Orlendis Benitez follow. Forge clearly needed a reshuffle, as in the eight minutes before their introduction, York had the vast majority of possession and three dangerous shot attempts.

“We were losing a bit on the pitch and that’s not something I like,” Smyrniotis said, later adding, “I thought we were just giving up a bit of space sometimes, which often comes through a We weren’t the best and most lively with the ball either, so I thought about refreshing two players.

The impact was felt immediately, as Woobens Pacius scored less than a minute later and really seemed to kill any chance of York getting a result from that game. Jensen, meanwhile, was brought in to help the team better possess the ball and did so well with 8 of his 7 completed passes. So did Benitez, who even had a decent chance late in the game.

“It was already 1-0 for us when I entered the game, it was quite easy to keep the score or score a goal,” said Forge striker Woobens Pacius. “I think I helped my team by scoring that goal. It was a good game with Ash [Morgan], a good center, and then I was right there at the right time. So it’s a team goal. »

It was the 21-year-old’s fourth goal of the season. While Terran Campbell has struggled to find his form with Forge this season (he had a team of 25 touches and just one shot against York), Pacius’ ability, whether on the bench or in the starting lineup, continues to be essential for Forge’s offense. depth.

It sounded like the same old story for York United, who did more than enough to score on the night but left the field for the eighth time in the last nine games without a goal and the sixth time with a loss. They had 1.28 expected goals and 13 attempted shots on the night, even creating a big chance.

“The message was that it wasn’t good enough in the end, again,” York United manager Martin Nash said of what we expect from his players after the game. “We can create all the chances we want but if we can’t get the ball in the net we’re not going to win games. So you’re asking people to step in because I think as a that group we are now doing enough in a lot of games to win I think we have a bunch of opportunities great chances we had a bunch of 0-0 games this year which we should have won in my opinion , personally, but enough is enough. We need to have guys step in, take the bull by the horns so to speak and put the odds aside.

He went on to say he felt his club had trained harder than they were playing at times this season. There were times during the game when York showed good intensity and a good fight, but much of that passion was misguided.

Frustrations boiled over late in the game as several York players were shown yellow cards in the dying moments of the game for off-the-ball fouls. Nash lamented that his team let their emotions take over when they really should have been fighting for a much needed goal.

York midfielder Jordan Wilson also made no secret of his frustration after the game, saying he felt defeated by the way this recent run of games went. He spoke of the club always seeming to play on the back foot, having scored first only three times this season (their two wins, against Cavalry and Forge, and in a 1-1 draw with FC Edmonton ).

“The dressing room is tough at the moment, it’s tough because we haven’t won, we’ve gone two months without a win,” Wilson said. “I can’t remember a time in my life when that happened. In other [league] we’re in the relegation zone, so I mean the vibes aren’t really there. But I publicly told the boys that I didn’t want to spend three months playing duds. Games that don’t matter, let’s try to come together now and at least get a boost for the playoffs, or play games that matter.

CanPL.ca Player of the Game

With most of Forge’s game on his flank, Rama had the most touches of any player on the pitch tonight. He turned that into an assist on Borges’ goal, and a record 22 assists in the final third.

York return home next Friday, July 15 (7:30 p.m. ET) for a game against Pacific FC, who have yet to beat York this season in all competitions. Forge, meanwhile, is having a bit of a breather before returning to action, at home against FC Edmonton on Tuesday, July 19 (6:45 p.m. ET).

Watch all matches live on OneSoccer. In addition to its website and app, OneSoccer is now available on TELUS channel 980 and Fubo TV. Call your local cable provider to request OneSoccer today.