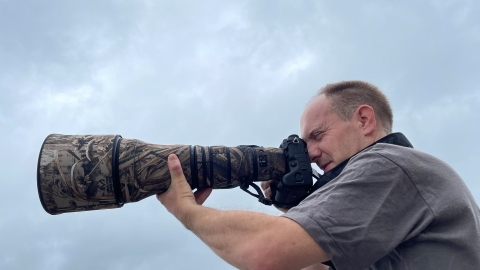 Featured bird in the Nanhui area in September

Have you ever noticed the many feathered friends that surround us in the city? This is the case of Kai Pflug, a German who has lived in Shanghai for more than 18 years.

Pflug works as a consultant for chemical companies. In his spare time, he is a bird photographer, a hobby he has pursued for seven years.

“Most of the time, I think birds are very beautiful. And for me, it’s much easier to appreciate that beauty by taking pictures rather than just looking at them,” Pflug said.

In Shanghai, his main location for tracking and photographing birds is the Nanhui area in Pudong.

“Honestly, I don’t know exactly how many species of birds I photographed,” he said.

He estimates the figure to be over 370, and their habitats include Chongming, Jiading and Songjiang counties and Pudong New Area.

“Chongming Island is an interesting place for bird watching, especially in winter. Sometimes there are also interesting birds in city parks, especially Century Park in Pudong.”

Pflug observed many birds at his residential compound in Jiangqiao City, Jiading District. Some birds nest there and even lay their eggs there.

His bird photos are posted on bulletin boards in the community, attracting many residents and sparking their interest.

“April, May, September and October are the best seasons for bird watching. Now is the season for migratory birds to bypass Shanghai,” he said.

One of her photos depicts the warm moment of a mother sparrow feeding her newborn baby.

Pflug is also interested in the hoopoe which is distinguished by its fan crest.

“You see it very rarely in Germany, but I’ve seen it in my community,” he said. “Red-flanked bluetails only visit in the winter, and I was lucky enough to photograph a male.”

In the residential complex, Pflug observed 25 species of birds and recorded many valuable images of them.

He spends a lot of time reading about birds. “I have a library of over 1,000 bird books,” Pflug said.

There are more parks and less pollution in Shanghai, he said.

The Jiangqiao region’s outer ring forest belt has a better ecological environment than in previous years, and Pflug said he often photographs birds there.

The flight over the city’s peak bird migration is scheduled for October, with Chongming Dongtan National Nature Reserve, Jiuduansha Wetland Nature Reserve, Hengsha Dongtan and Nanhui Dongtan being among the best viewing spots.

Featured bird in September in Nanhui

The city’s ever-improving environment has attracted increasing numbers of birds.

Nearly 520 bird species have been recorded in the city so far, with a number of natural habitats already established, Shanghai green authorities said.

Located at the estuary of the Yangtze River, Shanghai is an important stop on the bird migration route from East Asia to Australia due to its vast coastal and intertidal areas that provide resting places and sources of food for waterfowl, as well as its unique geographical position.

The number of bird species registered by Shanghai is 35.7 percent of the national total, according to the Shanghai Greenery and Public Sanitation Bureau.

Six are critically endangered species listed by the International Union for Conservation of Nature.

In recent years, the city’s natural areas, including Chongming Dongtan National Nature Reserve and Jiuduansha Wetlands Nature Reserve, as well as Nanhui Dongtan, Wusong River Bird Perch and Jiading Pengmen Wetlands , have become havens for birds and other wildlife, according to the office said.

Birds in the spotlight in the Nanhui region

Covering 9.67 hectares, the Wusong River Bird Habitat in Minhang District, close to the Suzhou Stream Ecological Corridor to the south, includes about 130 varieties of plants such as mulberry and canna. These have greatly improved the aquatic environment and provided food for the birds.

So far, the habitat has recorded 55 species of birds like the little grebe and the little egret. Nearly 3,300 birds of 76 species have been recorded in the Hengsha Dongtan area, and seven, such as the reed parrot’s bill and the broad-billed sandpiper, are second-class national protected species.

“Shanghai has a number of habitats for its avian friends,” said Ge Zhiyuan, a bird expert.

“Nanhui Dongtan is an ideal place for bird watching as it is home to more than 85 percent of bird species recorded in Shanghai,” Ge said.

“If people don’t want to travel far, urban areas such as Century Park have a lot of vegetation cover and are recommended places where large numbers of forest ‘fairies’ hide.

“Green spaces and ecological corridors have been built in many blocks along the rivers, and their rich aquatic plants give birds a sense of security, enabling daily bird watching for residents,” Ge added.

Featured bird in September in Nanhui

Unexpected visitors have been spotted in recent years.

A black-headed gull was spotted in Chongming Dongtan National Nature Reserve in July, the first time the species was seen on the Chinese mainland.

The species has only been seen in Taiwan a few times in the past, according to the Shanghai Greenery and Public Sanitation Bureau.

The seagull, named after its chirp, which sounds like a human laugh, was seen battling with a tern.

The nature reserve has been recommended for UNESCO World Heritage listing as a Designated Area of ​​China Migratory Bird Sanctuaries along the Yellow Sea and Bohai Gulf Coast (Phase II).

It will be the city’s first World Heritage Site if inscribed.