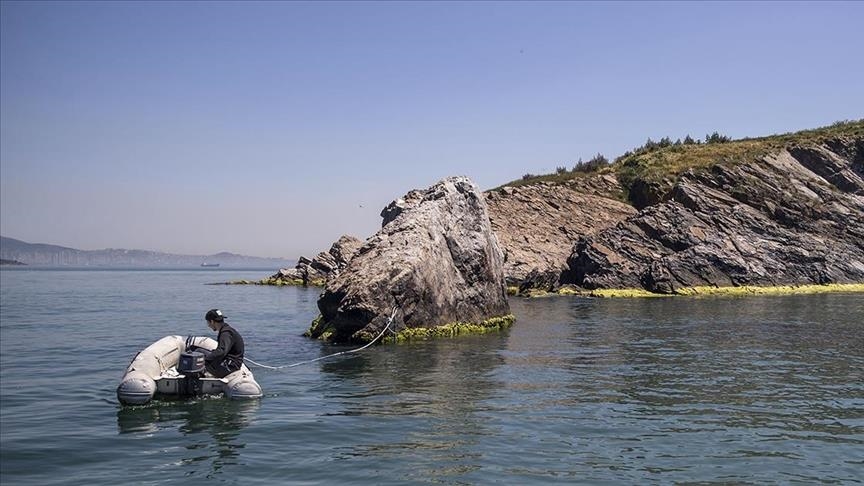 Some marine species, which had not been seen for many years in the Sea of ​​Marmara, reappeared as the measures taken bore fruit, according to Turkish marine experts.

“Restricting discards, controlling illegal hunting or limiting hunting and extending protection areas contribute to the spread and reproduction of species and the increase of these species. We get the results almost immediately,” Ahsen Yuksek, an academic at Istanbul University, told Anadolu Agency.

Yuksek pointed out that inspections at the Sea of ​​Marmara have increased and measures are strictly enforced in terms of pollution and fishing.

There are still great dangers, she said, adding that the ecosystem is in an “acute cycle, like the edge of a knife”, that something unexpected can always happen.

Pointing out that they recently received pictures of sea urchins and sponges, she said tuna were rarely seen in the Sea of ​​Marmara, which has been hard to see since the late 1980s.

If given the opportunity, rare species could be more visible, she said, adding that lobsters, which are under primary protection and threat, could be seen in the Sea of ​​Marmara at 12 meters (39 feet).

She added that they had found sole and sea bream eggs in the Golden Horn, as well as the octopus which had already been seen in the south.

“The octopus normally lives in areas close to the coast if it sees no threat. It is a species that exists if it has no nesting area or shortage of food,” she said , adding that octopuses can multiply rapidly if given rest.

Eda Topcu Eryalcin, an academic at Istanbul University, said she expects a marked improvement if the decisions taken are fully implemented.

“Species grow much faster here than in other regions. Their development is really fast. I think when we reduce those pressures, there will definitely be an improvement,” Eryalcin said.

When we start to see recovery in Marmara through data, we can start better coral restoration work, she added.

“We had the opportunity to see mostly Mediterranean species such as octopus, lobster, some species of squid, which were very common in the 1960s and 1970s, and species that were not seen in the Seas of Marmara and Black. Their numbers have increased a lot,” she said.

Stressing the importance of implementing and monitoring the action plan, she said it was necessary to ward off fishing and the anchor effect.

After the sighting of mucilage in the Sea of ​​Marmara, the decision to identify and declare certain areas as special environmental protection zone was published in the Official Gazette. The decision was signed by Turkish President Recep Tayyip Erdogan last year and the Marmara Sea Action Plan was implemented.

Copyright 2022 Anadolu Agency. All rights reserved. This material may not be published, broadcast, rewritten or redistributed.