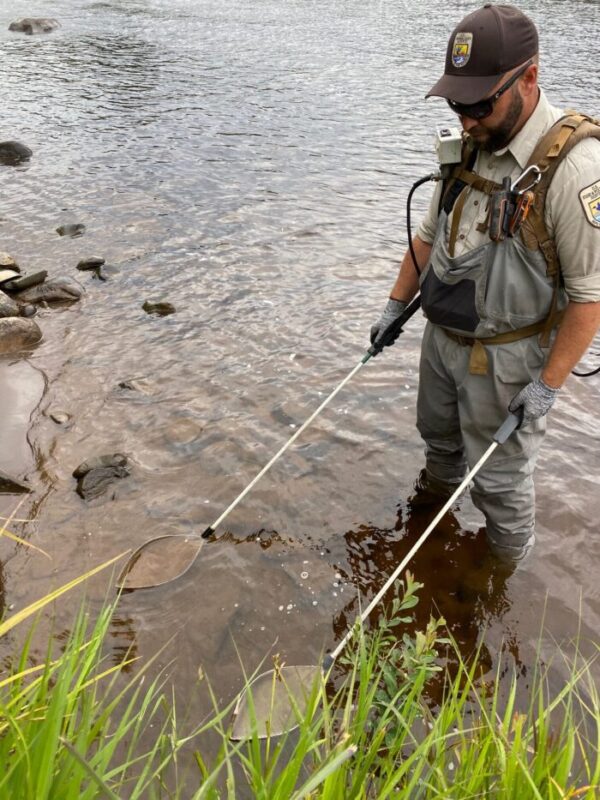 Nikolas Rewald tends to feel resentment when a sea lamprey is found in a river on the North Shore.

“Yeah, I take it a bit personally,” he said.

A biologist with the U.S. Fish & Wildlife Service based in Marquette, Michigan, Rewald’s primary focus is killing sea lamprey. He and another Fish & Wildlife researcher, Michael Woodworth, have been on the north shore of Lake Superior for the past few weeks conducting research on sea lamprey larvae in a collection of rivers from the Duluth area to the Brule River. at Judge Magney State Park. The research team was looking for young lampreys in the Brule and other rivers along the North Shore, including the Knife River, to gather evidence of the number of lampreys spawning in these waters. For example, Rewald said he found three different age classes of sea lamprey in the Knife River near Two Harbors this year.

The sea lamprey is an eel-like fish that reaches 12 to 20 inches in length, depending on the Minnesota Department of Natural Resources. The sea lamprey has a nightmarish quality, especially its sucker-like mouth filled with teeth arranged in concentric circles.

Young sea lampreys live in streams or rivers, including places like Poplar and Brule in the WTIP listening area, where they begin life feeding on algae and existing as filter feeders.

Cory Goldsworthy is the Lake Superior Region Fisheries Supervisor for the DNR in Minnesota. He says a wet spring that washed out some of the rivers along the North Shore could impact sea lamprey spawning habitat this year and for years to come.

Sea lamprey larvae spend four to six years in the stream, where they live in a less disturbing state, at least physically speaking, lacking teeth and eyes at this stage of life. They then move on to their parasitic phase and migrate into the open waters of Lake Superior to feed on fish for about 18 months. They feed like a vampire, sucking the blood of lake trout and other fish to which they manage to attach themselves.

Rewald said most people don’t know about the sea lamprey’s life cycle, including people who live near or recreate on Lake Superior.

“Most people don’t even know they’re in streams,” he said. “We deal with a lot of landowners and a lot of them are just shocked that we’re removing lamprey from the creek they’ve lived on all their lives. They never saw them and didn’t know they were there.

Cold water this year in Lake Superior, with surface temperatures slightly above 40 degrees for most of the summer, is impacting the Fish and Wildlife Service’s ability to conduct some lamprey control measures. .

“We were supposed to do a lot of work this trip, but unfortunately the water in the lake is too cold this year. We cannot use the chemical. We need 12 degrees Celsius water and we’re getting single digits in most of our areas,” Rewald said.

Woodworth observed that most sea lamprey mitigation efforts take place on the south shore of Lake Superior, in the Wisconsin and Michigan rivers that flow into the Great Lake.

Despite the cold water temperatures, the Fish and Wildlife Lamprey Control Team was able to research the number of young lampreys in the Brule. On a recent Saturday morning, Rewald and Woodworth waded into the river equipped with the gear they needed to find young lampreys buried in the sand or silty bottom of the river. Equipped with bags that look like something a ghost hunter might carry, the researchers zapped the larvae with electrofishing gear. The devices have a basket at the end of a 4ft. wand that sends electric currents through the silt and stuns any sea lamprey hiding at the bottom of the river. A series of beeps from the pack on their back indicates that electricity is moving through the water.

The news that young sea lampreys have been discovered in a new section of the Knife River this year is not good news for state, federal and international agencies trying to eliminate or at least heavily control the population of the lake. Superior. Reports of lamprey scarring lake trout along the north coast and waters near Isle Royale are also of concern to federal and state officials.

To hear a full report from the Brule River and interviews with state and federal wildlife officials who work on lamprey control on Lake Superior, listen to the audio feature below.

PROPOSAL FOR STORAGE AUTHORIZATION AND ENHANCED PROTECTIONS AGAINST THE SPREAD OF AQUATIC INVASIVE SPECIES TO BE DISCUSSED AT THE COMMITTEE MEETING, PUBLIC COMMENT PERIOD EXTENDED