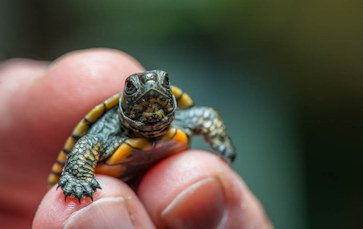 PORTLAND, Ore. (KTVZ) — Ten tiny Northwestern pond turtles have arrived at the Oregon Zoo’s conservation lab. The zoo “takes the lead” on endangered reptiles, caring for them until next spring, when they are big enough to have a fighting chance in the wild.

“Newborns are particularly vulnerable at this stage,” said Sara Morgan, senior keeper of the zoo’s Greater Northwest region. “They’re smaller than a nut – so small a bullfrog can gobble them up right out of the nest.”

The American bull frog, native to the eastern United States but considered invasive here, is the continent’s largest frog species. It can tip the scales over a pound and has driven pond turtles and a host of other vulnerable small aquatic species to the brink of extinction.

In late May, Morgan and his colleagues helped Washington Fish and Wildlife biologists retrieve turtle hatchlings from sites in the Columbia River Gorge, transporting them to the zoo’s conservation lab. With heat lamps and plenty of food, turtles live summer year-round so they don’t go into hibernation. Once they reach around 50 grams (just over 2 ounces), they are returned to their ponds and monitored for their safety.

“We’re making sure they’re safe and warm, and have all the food they need,” Morgan said. “When they return to the wild, they’re only about a year old, but they’re as big as 3-year-old turtles.”

The northwest pond turtle, also known as the western pond turtle, is listed as an endangered species in Washington and a sensitive species in Oregon. Two decades ago, pond turtles were on the verge of complete extinction in Washington, with less than 100 turtles remaining in the state. Since then, more than 1,500 zoo-headed turtles have been released.

“This is a critical time for these turtles,” Morgan said. “We need to increase their population if we want to save the species.”

The Western Pond Turtle Recovery Project is a collaborative effort between the Oregon Zoo, the Woodland Park Zoo, the Washington Department of Fish and Wildlife, the U.S. Fish and Wildlife Service, the Bonneville Power Administration, the US Forest Service and other partners.

A species of mosquito from Papua New Guinea, lost for 90 years, found in Australia