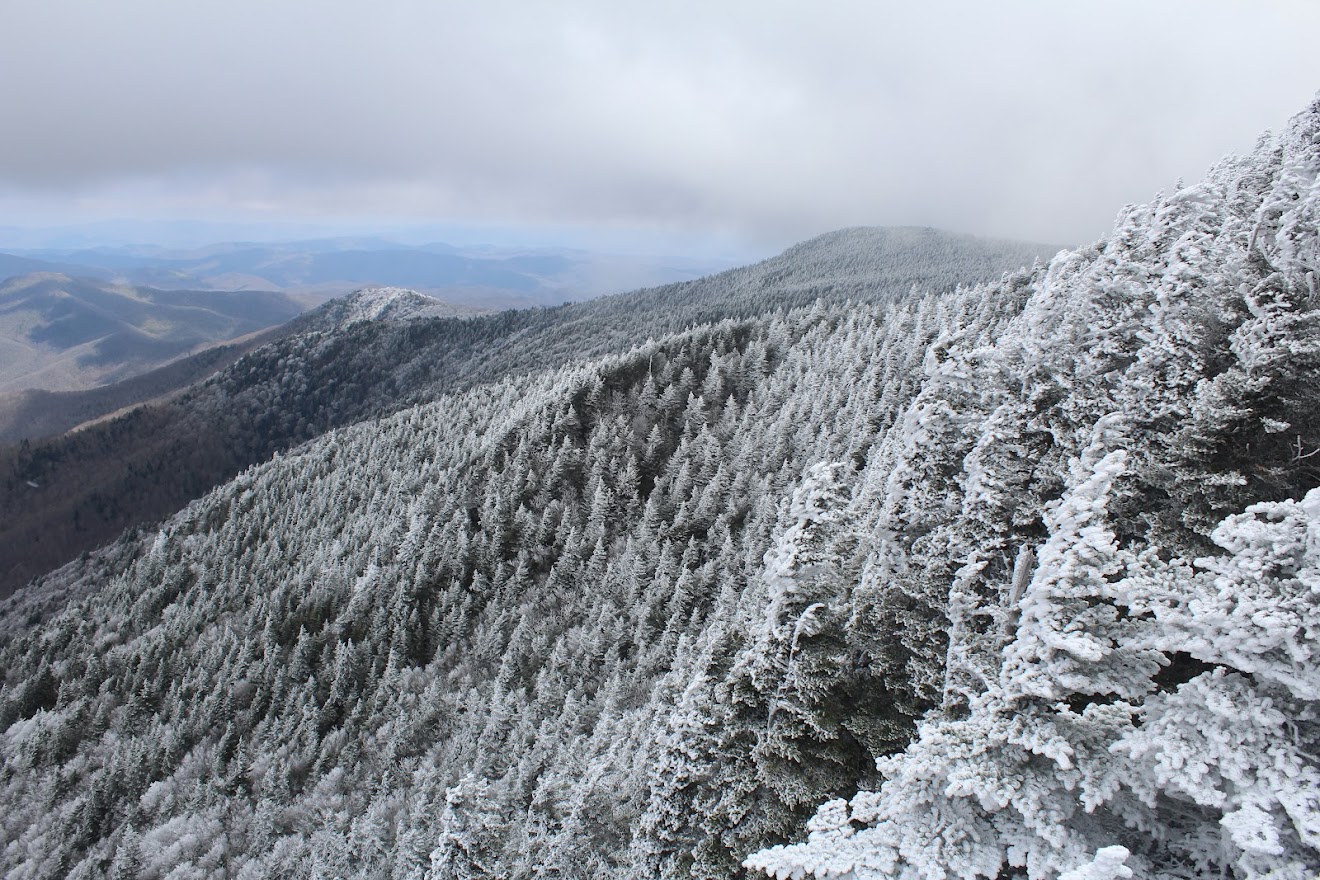 The tip of budding red spruce tucked behind the trunk of a fallen tree trunk in a grassy opening has recently been nibbled, possibly by a rabbit or deer.

It’s one of 2,500 spruce seedlings Haw Orchard Ridge volunteers have planted on 9 acres at an elevation of 5,400 feet just south of Roan High Knob in Mitchell County.

The reserve purchased the 51-acre property from a willing seller in 2019. Only some of the saplings will survive starving animals or the harsh weather conditions of North Carolina’s highest elevations.

The orchard property is adjacent to a section of the Pisgah National Forest. Higher up, it is apparent from the dark canopy of conifers that red spruce is abundant. But here, there are more hardwoods — beech, maple, oak and birch — than spruce.

“In areas that have a good spruce component, if we can just grow that conifer and become a cone tree, that will start the whole restoration process,” Crockett said. The goal of the project is to create coniferous habitat for conifer-dependent species from Roan High Knob to Grassy Ridge.

The project is one of several projects spawned by the Southern Appalachian Spruce Restoration Initiative, a formal partnership of organizations that developed a strategic plan for red spruce restoration in 2013.

The group is made up of private and public organizations, including the Appalachian Trail Conservancy, NC Wildlife Resources Commission, Grandfather Mountain Foundation, US Forest Service, and Nature Conservancy, among others.

The project has developed a restoration plan and is building capacity to store seeds and identify future red spruce restoration projects, including Haw Orchard Ridge.

While some forest plants and animals can thrive despite a warmer climate, species that depend on specific growing conditions may be most at risk.

Among them is the spruce-fir forest ecosystem which is a critical breeding ground for animals found nowhere else in North Carolina.

These species, such as the moss spider, northern flying squirrel, saw-whet owl, and Weller’s salamander, have adapted to short growing seasons and relatively cold conditions.

“This is really specific habitat for species that depend on spruce,” Crockett said. “If you lose the spruce, we will lose this suite of species.”

The tiny and extremely rare spruce-fir moss spider – the world’s smallest tarantula – measures just a tenth of an inch and resides in soggy, high-altitude spruce-fir forests. The population of the elusive spider is very small and on the verge of extinction.

Like other animals, the spider is contained by the habitats in which it lives.

Spruce and fir forests are among the most threatened forest landscapes in the region and are shrinking due to climate change.

The species and many others, such as elk, black bear, salamanders, trout, squirrels, owls and a host of other creatures, are citizens of island habitats and can only thrive in specific forest and ecological conditions.

As families move from neighborhood to neighborhood for better schools or safer streets, so do animal species that seek the right combination of environmental conditions – food, shelter and space – to survive. .

For the federally listed endangered moss spider, their sanctuaries are clumps of emerald green moss in disconnected islets of spruce and fir forests.

The future of spiders and other montane forest species depends on keeping their islands of habitat connected to a larger ecological landscape troubled by an altered climate.

On a map, Crockett describes enclaves of spruce and fir forest as “tiny little droplets” existing in the highest elevations of the Southern Appalachians, including Mount Rogers in Virginia, the Great Smoky Mountains, the Black Mountains , Grandfather Mountain, the Balsam Range. and the Roan Highlands.

In North Carolina and Tennessee, there are about 70,000 acres of spruce and fir spread among small havens of land, isolated from each other.

Extremely cold temperatures during the Ice Age allowed plants and animals from northern latitudes to expand their range south. But as the glaciers receded and the climate warmed, cold-adapted species became isolated in patches of terrain on the highest peaks of the Southern Appalachians.

Over the past century, the extent of spruce-fir forest has been reduced by road building, fires, livestock grazing, recreational development, and timber harvesting.

Damage to spruce-fir forest caused by intense logging in the early 1900s on the slopes of the Black Mountains and other high elevation ranges in western North Carolina has lasts a long time.

In addition to the extraction of trees that have stripped the slopes, the fires started by sparks from rail and hedge fires to remove flammable waste have deeply damaged the soil and the regenerative capacity of red spruce and Fraser fir.

“Spruce grows slowly and needs lots of sun,” Crockett said. “So once the spruce felled, the hardwoods grew in their place. Especially at relatively low altitudes, the spruce just lost the battle.

Forests are also vulnerable to other imminent threats, such as land use change and development, air pollution, alien plants, invasive pests and diseases.

In fact, the spruce-fir forest has already been affected by the deadly balsam woolly aphid.

The pest was first spotted on Mount Mitchell in 1957, imported from Europe decades earlier. The aphid has a disastrous impact on Fraser firs, stunting the tree to a modest height before it finally succumbs to the pest.

Aside from pests, a warmer climate, changing rainfall patterns, and a longer growing season are expected to worsen the impact of insect pests and the spread of invasive plants. As a result, it is more difficult to restore these unique habitat islands as they retreat to higher elevations and continue to give way to hardwoods.

SAHC’s Haw Orchard Ridge is a small component of the 65,000 acre conservation area known as the Greater Roan Highlands Landscape.

The project area encompasses a mosaic of high-altitude private and public landholdings in Avery and Mitchell counties in North Carolina and Carter county in Tennessee. The project, home to one of the richest collections of biodiversity in North America, includes 1,500 native plant species.

“The area has always been a destination that people have loved, and it feels like the Roan is really special,” Crockett said.

“There has always been a strong ethic of stewardship among the people who have lived here – and I’m not just talking about European history. Roan is a special place for the Cherokee. The people who live here have learned to make a small impact on the earth.

While approximately 20,000 acres of the Greater Roan Highlands Landscape are open to the public, the majority of land in the Landscape is conserved and managed by private landowners or conservation organizations. The area faces the risk of development as more people move to the area, Crockett said.

In 2021, SAHC announced its biggest land donation to date in the Roan Highlands, a 7,500-acre plot donated by a conservation philanthropist Tim Sweeney.

In total, the SAHC will manage approximately 12,000 acres in the Roan Highlands.

“The idea of ​​conserving relatively large amounts of land that is connected is that because of the uncertainty of climate change, we don’t know exactly what species are going to be here or what the habitat will be like,” Crockett said. .

“We can model and try to figure it out, but the idea is that we have retained enough diversity of habitats and species that there is something that can take over. What it will be, what it will look like, how it will work is all beyond what we know now.

Time will tell us

Eventually, saplings planted on Haw Orchard Ridge and other pockets of forest will form an ecological bridge of intact conifers connecting the spruce and fir archipelago.

“Theoretically, there will be enough coniferous components for animals to move from place to place, even if it’s not solid spruce,” Crockett said. “It’s hope.”

Yet the impact of planting trees now and the fate of the animals that depend on the habitat’s unique refuges may not be evident for years or even decades.

“That’s the funny thing about being a biologist: you’re constantly doing things that you might not see in your lifetime,” said Crockett, who has faith in science and a conservation philosophy that assumes that larger forest landscapes are more resilient to climate change. than isolated islands of land.

“It goes back to the basics of conservation in that one big reserve is more valuable than several small reserves,” she said.

“On the one hand, we are protecting these incredibly high and climate-sensitive habitats, but protecting them also makes the whole region more climate-resilient.”

Images of the Roan Highlands