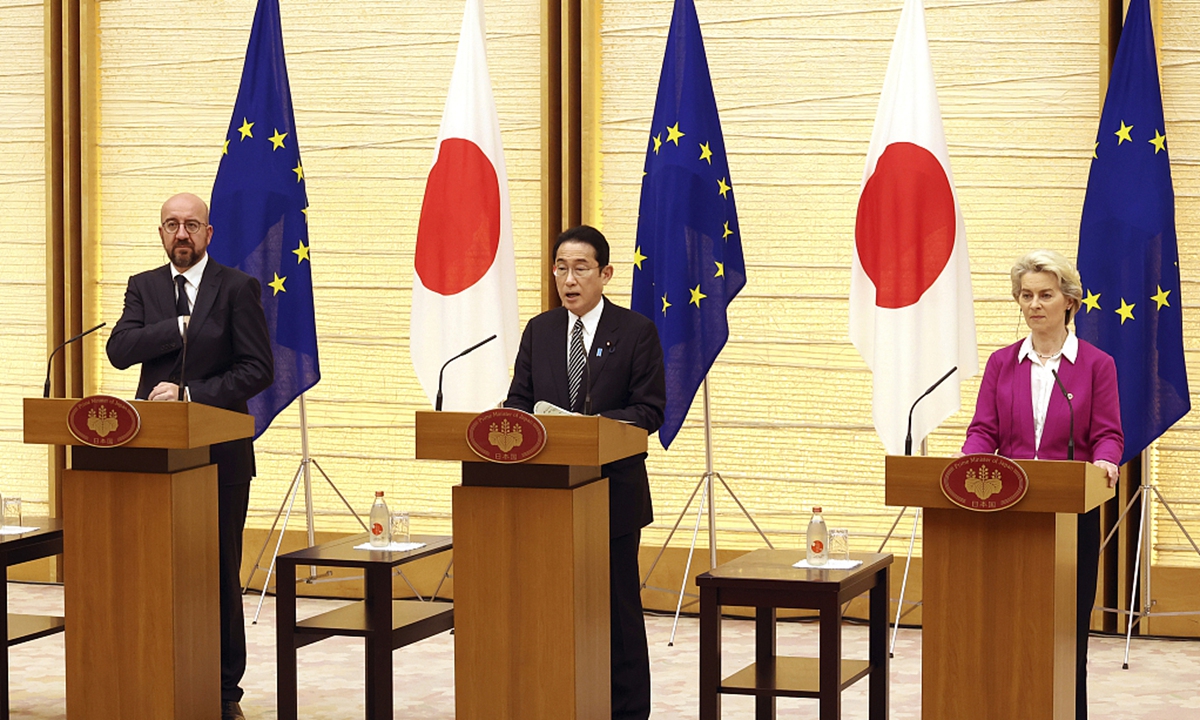 Japan and the EU should avoid fueling acute geopolitical contradictions

Japanese Prime Minister Fumio Kishida, European Council President Charles Michel and European Commission President Ursula von der Leyen held the 28th EU-Japan summit on Thursday in Tokyo. The joint statement after the summit covers a wide range of issues ranging from economy and trade to security, from the Russian-Ukrainian conflict to China-related issues. This not only shows the strategic ambition of Japan and the EU to lead international changes, but also reflects the two sides’ attempt to intervene in global geopolitical disputes.

As two important forces in the post-war international landscape, Japan and the EU have a long history of interaction, but relations between the two sides have been tepid due to their estrangement. In recent years, marked by the Japan-EU Economic Partnership Agreement which entered into force in 2019, the two sides have accelerated their strategic approach and their relations have extended from the economy and trade to the political and security fields. In the context of the Russian-Ukrainian conflict, this cycle of Japan-EU interaction has highlighted three main trends.

First, their ambition to become the world’s “third pole” driven by strategic autonomy. In recent years, Japan and the EU have positioned their relationship as global partners, claiming to maintain the so-called rules-based international order as democracies and “defenders of liberal values”. Judging by this series of interactions, both sides have taken to exaggerating the impact of the Russian-Ukrainian conflict and Indo-Pacific changes on the international order. Their broad cooperation shows their strategic ambition to jointly shape the new international order. This is motivated by their concern to avoid simply relying on US security commitments, as well as their understanding that they cannot assume global leadership alone and that there is a need to jointly form a “third pole” in addition to China and the United States.

Europe recognizes that the Indo-Pacific is becoming the economic and geopolitical center of the world, and that its future global role largely depends on its influence in the region. The EU must actively participate in the game of great powers in the region, otherwise it will be marginalized. The EU chose Japan because of their similar ideology, as well as Japan’s strong economic power and military security potential. Jointly maintaining the security of Indo-Pacific sea lanes and the balance of forces have become the two strategic goals of Japan and the EU.

The third trend is to jointly confine China in the name of maintaining “international order”. Despite the geopolitical crises, the EU has not relaxed its attention towards China. This joint statement blatantly interfered in China’s internal affairs, sending a very provocative signal. In the future, security cooperation between Japan and the EU will always mainly target China.

Japan dominates the EU in both sides’ focus on China. Japan and the EU have different security concerns regarding China. In fact, Japan has positioned China as a major threat, but there is no geopolitical conflict of interest between China and the EU. The EU will not easily take risks in the East China Sea, the South China Sea and the Taiwan Strait.

Japan’s active promotion of military and security cooperation with the EU aims not only to pressure Russia, but also to circumvent domestic public opinion and legal constraints to break military constraints after World War II.

The author is a researcher at the China Institute of International Studies. [email protected]