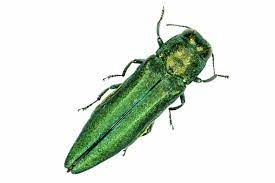 Until a century ago, the arrival of pests and pathogens from Europe wreaked havoc on American elms and chestnut trees, leading to their near extinction in many areas of the eastern forests. In the west, exotic annual grasses from Europe have largely replaced native tufted grasses, altering the grazing and fire regime over large swaths of the landscape.

Today, massive transport of people and goods across the oceans accompanies the world of economic globalization. We know how long it took for the COVID virus to spread everywhere from its origins in China. We pay close attention to human disease, but we allow the global transport of alien species, pests and pathogens to continue without warning.

A few years ago, Gary Lovett and his colleagues at the Cary Institute of Ecosystem Studies noted that alien insects were accumulating in North American forests at the rate of 2.5 species per year. Fortunately, only a few of them are problematic, but the recent arrival of the emerald ash borer has all but wiped out the ash in the eastern United States. One can easily imagine that the sugar maple borer could do the same for this emblematic species, important for maple production. syrup and specialty hardwood.

A new paper by Gyda Fenn-Moltu and others confirms an earlier sighting of Lovett’s group. By analyzing almost two million records of border interceptions from air, land and seaports around the world, they found that almost 9,000 alien species, potential pests, had been caught, mainly from plant and wood products. The horticultural industry is responsible for a large proportion of the pests that arrive on exotic plants, and even the plants themselves can prove problematic (eg Jubatagrass in California). Wooden packing materials such as pallets and crates hide the arrival of many insects, such as the emerald ash borer.

All this speaks to the need for widespread and intensive inspections of all goods coming from abroad. In the United States, this is the work of APHIS, the Animal and Plant Health Inspection Service of the United States Department of Agriculture. We value international transportation products and should be willing to do our best to delay international stowaways who may inadvertently accompany them. Without border protections against alien species, the world risks becoming biologically homogenous and less diverse, impoverishing us all.