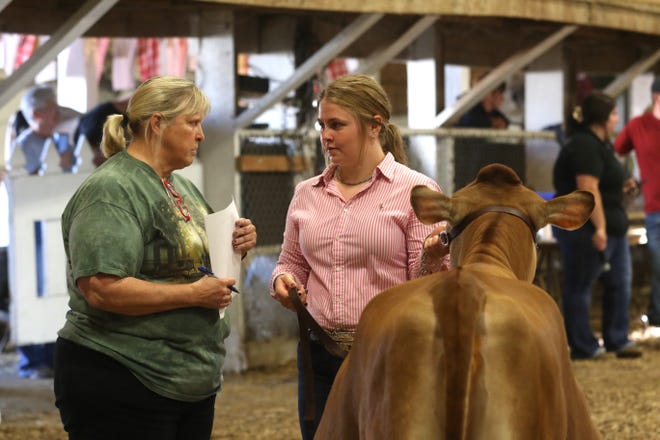 Hatfield the best of the best

ZANESVILLE — The best of the best had their chance to shine Friday morning, when the winners of each species’ showmanship featured at the Muskingum County Fair competed in the Showman of Showmen competition.

The winners of each species began their Friday morning in the horse arena, where they each led a horse through a pattern. They then went to the pigsty, where each showed a pig to Judge Jim Heckel of Roseville.

Heckel, who has a pig farm himself, said there was an element of luck in showing a pig. “That means the pig has to cooperate.” Most other species can be held or have some sort of halter to hold. “Pigs are very good at detecting people, so if you’re pissed off, chances are the pig will be too.”

It happened to a competitor today, Heckel said. But as they kept their composure, the pig calmed down and they ended up putting on a good performance.

Most of the competition took place at the Coliseum, where they rotated through the rest of the classes.

Jacque Woodward of Coshocton was the poultry judge, quizzing each of the winners on a pair of ducks. “These are the kind of kids you want to hire, you want to run the country,” she said. “I really think you can’t beat a 4-Her or FFAer who has gone through the program. The respect and care they have for their animals and each other, their sportsmanship, is second to none. .”

Woodward said the poultry portion of the contest was largely based on knowledge of birds; things like what species it is, what it should weigh before market, and what the marketability of the bird is. But she also looked to see if the participant was shaking her hand and making eye contact. There were also current events, when she asked each of them about the bird flu that decimated some poultry populations in the state.

Chandlersville’s Kelsey Ault, who helped organize the competition, said the entrants are the best of the best. “It’s a dream to win your global species,” she said. “They worked all these years to get to the top.”

“You bring the best of the best of each species, you take a kid who can show all species, he’s a real showman,” she said. “It takes a lot to learn all that.”

There were long nights spent in the barn learning and showing other species, she said, while caring for their own animals. “It shows you how hard they’ve worked to get here,” she said.

Hatfield has known some of his show mates for years. She had friendly competition with Tooms on her cattle show days and worked with Hinkle as a 4H camp counselor. She’s been friends with Settles for years, she said. “We weren’t one to want to hide secrets, we wanted everyone to succeed,” she said.

She was able to apply what she learned raising a calf to other species, but getting bitten by a duck and scratched by a rabbit was a new challenge. “You have to understand what they like, it reminded me of how you start breaking a calf when you take them to the stages I take them to.”

Hatfield takes shows very seriously, she said, and Showman of Showmen is the pinnacle. “To finally be able to reach it is an incredible feeling.”

Showing an animal teaches children responsibility, Woodward said, as well as interpersonal skills, and builds friendships. “These children are our future leaders,” she said. “They are going to make the world a better place,” Ault said.

Hatfield plans to attend Muskingum University in the fall to major in nursing. She would like to become a traveling nurse.

PROPOSAL FOR STORAGE AUTHORIZATION AND ENHANCED PROTECTIONS AGAINST THE SPREAD OF AQUATIC INVASIVE SPECIES TO BE DISCUSSED AT THE COMMITTEE MEETING, PUBLIC COMMENT PERIOD EXTENDED