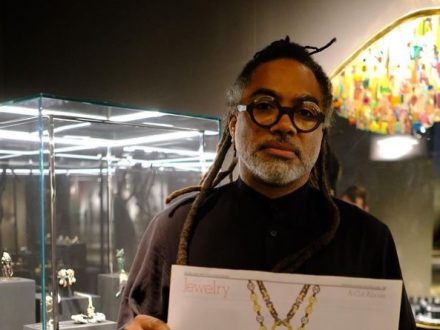 The American jewelry designer known as Castro NYC has died. His death came as a shock to many in the industry, prompting a slew of tributes to the much-loved jewelry artist.

Castro was known for his inimitable style which incorporated antique elements, such as the tiny porcelain dolls known as pupins in his Dollies series. The jeweler, who had a passion for thrift and antique hunting, embellished these toys, which were originally made as companions for larger dolls, with gems and embellishments such as wings or tiny jewelry of their own. Sometimes a single design would require over 200 hours of craftsmanship, with designs drilled directly into the porcelain.

The designer liked to be provocative in his work and didn’t care for the mainstream market – although his more accessible works included a line of jeweled locks offered by US stores such as Twist, Muse x Muse and Stella Flame. As such, her work attracts collectors of art jewelry, who appreciate her singular, often macabre creativity, touching on medieval references and African culture. It has also earned him the respect of the jewelery design community, with Birmingham metalworker Dauvit Alexander, who goes by The Justified Sinner, describing him as “a jeweler’s jeweler”.

London jeweler Stefania Indelicato, founder of the Ambersouk brand, calls Castro “one of my favorite artists”. She says in tribute: “Moving, witty, funny, unexpected, powerful and one of a kind, just like your precious jewels. The world has lost a true gem and legend and it will feel like an emptier place without you, but your light and your legacy will continue to shine.

Castro was born in Toledo, Ohio, where he discovered a passion for jewelry after taking a weekend class. This led him to work in repairs and then to open his own store in the city. There he sold other designers’ work while he worked on repairs, but after agreeing to make a custom ring for a client, it sparked interest in the design.

After this early alliance with jewelry, Castro changed course and took a job in the fashion industry, working in retail in Chicago. When he then moved to New York in 2006, he rediscovered his old passion and began selling leather creations adorned with wrapped crystals on a sidewalk table in the city’s Soho. It was a humble start but a launching pad for what has become a luxury collectible brand, with Castro NYC pieces now selling for tens of thousands of dollars, and the jeweler traveling the world to woo clients including Aerosmith’s Steven Tyler, actress Whoopi Goldberg and ZZ Top’s Billy Gibbons.

“Castro was a rare gem in the world of contemporary jewelry, not only for his extraordinary creations but also for the life choices he made to achieve his dreams,” says Jacqueline Rabun, an American jewelry designer known for her long-standing collaboration with Georg Jensen. “I felt a deep connection to his nomadic spirit when we first met at PAD London in 2018.”

In recent years, recognition of Castro’s talent has spread around the world as the jeweler has participated in a number of high-profile collaborations and initiatives set up to celebrate the work of black designers. In 2021, he was selected to be part of the Brilliant and black: a renaissance in jewelry sale at Sotheby’s organized by British journalist and author Melanie Grant. The following year, he was approached by De Beers to participate in its black is shiny campaign that pairs black designers with celebrity stylists to create red carpet jewelry with Botswanan diamonds.

“It’s hard to believe Castro is no longer with us,” says Sally Morrison, public relations manager for natural diamonds at De Beers. “How can a man so vigorous, so colorful, so abundantly full of life in all his dizzying complexity, simply cease to be? He was tall. He was bold. He was a real artist. It will be some time before we truly understand the extent of its cultural heritage, but it will be profound. Particularly for young designers wishing to innovate in fine jewelry. Until then, we will remain carried by the incredible work he left us and exalted by the memory of his spirit.

British jewelry designer Castro Smith was one of many industry friends Castro contacted via Instagram, and the designer known for his etching work had hoped the pair could one day collaborate on a project together, playing on their common name. “[He was] Honestly, a big inspiration to me, because he was out there in the clouds, already pushing ambiguity into a rigid universe,” Smith explains.

Just three months before his death, Castro brought together a group of 10 black jewelry designers, including UK-based Satta Matturi, Thelma West and Melanie Eddy, to hold a jewelry auction titled #HandinHand to raise funds for humanitarian efforts in Ukraine.

“I’m still devastated by the news of Castro’s passing,” says jewelry designer Satta Matturi. “He was a huge talent with a big, happy personality that he shared with everyone in the industry. We connected and agreed on a lot of things; including a desire to promote jewelry as art. He was passionate and unapologetic about his jewelry style and always sought to push boundaries and boundaries. His exceptional creativity will be missed by all of us.

Castro spent his final years in Istanbul, moving to the Turkish city in 2016 to escape “the rat race” of New York. He set up a design studio there and hired the work of local artisans, whom he worked with to help realize his creative vision. Under Castro’s latest Instagram post, Istanbul Jewelery Week commented, “Istanbul has always loved you and we…[appreciated having] a wonderful, most talented, designer in the house. You will always be remembered.”

It was a dream of Castro to eventually settle in West Africa, where he hoped to establish a workshop and share his knowledge with local artisans. His vision was to create around him a jewelry center that would one day have the skills to make his jewelry, and perhaps that of others.

“His strength and courage to follow his call and realize his vision from his studio in Istanbul was remarkable; navigating a new culture and setting up a design studio requires serious determination,” says Rabun. “He always asked me, ‘How is life in Cali?’ when I returned after living in London for several years, as he expressed his desire to find a home in Africa near a beach. I wonder how his creativity would have evolved if he had continued his journey from the homeland. I am sad that he did not have the chance to live this experience. Something tells me he would have continued to thrive in ways unimaginable with his feet firmly planted on African soil.