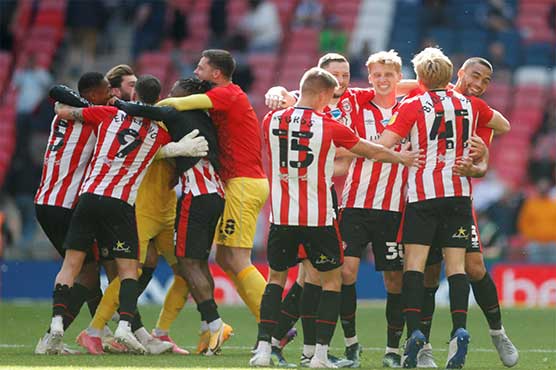 LONDON (AFP) – Brentford was promoted to the Premier League for the first time in 74 years on Saturday beating Swansea 2-0 in a league play-off final worth around $ 255 million to the winners.

Thomas Frank’s side completed their magical rise with goals from Ivan Toney and Emiliano Marcondes in the first half at Wembley.

Swansea’s Jay Fulton was sent off midway through the second half to put the result beyond doubt in what is widely regarded as football’s most lucrative game.

After decades stuck in the darkness of the lower league, old-fashioned Brentford will be one of the smaller clubs to play in the high end.

In their second season only at the new Brentford Community Stadium, the Bees will host Manchester City, Manchester United and Liverpool in West London.

The riches gained from the victory will be transformative for Brentford, who has finally erased the painful memories of their miserable past at dams.

Defeated by Fulham in the Championship final last season, Brentford had failed to secure promotion in all of his nine play-offs before that term.

No team had lost more play-off finals than the Brentford four, but Frank had insisted that bad omens would count for nothing.

The Bees boss got it right when he became the first Danish coach to win a promotion in the Football League.

Brentford’s rise has captured the imaginations of the neutrals after spending 59 of 60 seasons in the third or fourth tier before reaching the championship in 2014.

They have climbed well above their traditional status thanks to innovative owner Matthew Benham.

Benham introduced an analysis-influenced approach overseen by two football managers, ensuring the club make the most of their resources, which are meager compared to the richer teams in the league.

Rightly, it was Championship top scorer Toney who put Brentford on track for first place for the first time since 1947.

Now the 25-year-old, rejected by Newcastle as a youngster, will have the chance to show he can thrive in the Premier League.

Six members of the Brentford squad started last season’s final and they quickly took the initiative in their redemption attempt.

In front of a crowd of 11,689, including 5,000 admitted supporters from each club following the easing of lockout restrictions, Brentford took the lead in the 10th minute.

Bryan Mbeumo made a smart run behind Swansea’s defense to reach Sergi Canos’ superb pass into the penalty area, which prompted Freddie Woodman to go out of his line and crash into the Brentford forward.

Referee Chris Kavanagh indicated the spot and Toney stepped in to place the penalty in front of Woodman for his 33rd goal of the season.

Brentford was not going to stay in the lead and a dazzling counterattack produced his second goal in the 20th minute.

Coming out of their own penalty area, Frank’s men caught Swansea out of position as Mbeumo picked Mads Roerslev.

Roerslev’s cross was perfectly measured for Marcondes and he guided a clinical finish in front of Woodman from 12 yards.

Toney was inches from his second goal moments later when his diving volley hit the bar and bounced off the line.

Swansea, shocked by Shell, was in such bad shape that she didn’t hit a single shot until the 38th minute.

Andre Ayew curled a header on the bar on the stroke of halftime, but the Swansea forward fell short of his billing as the league’s highest-paid player.

The Ghanaian sent a diving header just off Connor Roberts’ cross shortly after the interval.

And when Fulton saw red in the 65th minute for a gross foul on Mathias Jensen, it was only a matter of time before Brentford could start their promotion night.

Regarding the approval of candidatures for members of the Supervisory Board