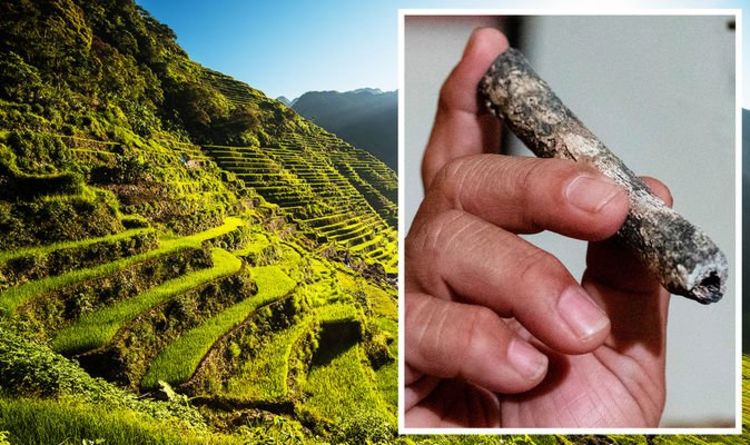 Africa’s content has become the richest and most valuable source for understanding where humans come from. In 1974, Lucy, an Australopithecus genus of the first hominids, was discovered in Ethiopia. She quickly turned out to be one of the earliest known human ancestors – around 3.2 million years old.

Much later, around 300,000 years ago, modern humans – Homo sapiens – would have evolved in East Africa.

Then, about 70,000 years ago, the sapiens left their native lands and spread around the world.

50,000 years ago, they reached the southern coast of Asia and Oceania.

However, along the evolutionary chain there were several other Homo genera, with researchers discovering in 2019 what they believed to be a never-before-seen human species.

A video created by the scientific journal Nature, explored the discovery that was made deep in an isolated cave in the Philippines.

In an image of a small bone found in the cave, the documentary’s narrator said, “Scientists believe this small bone fragment belongs to a previously unknown human species.”

The new species was named species Homo luzonensis after the island of Luzon, he was found on.

Only a few clues to the existence of this species have been unearthed: bones of the hand and foot, a femur and seven teeth.

While researchers are cautious about estimating the height of luzonensis due to the paucity of remains, they believe their owners’ bodies were somewhere in the range of small sapiens, similar to those of members of some indigenous ethnic groups living in Luzon and elsewhere in the Philippines today.

They may have been around or just under four feet tall.

It was the second species of dwarf human to be found in Southeast Asia.

In 2004, scientists presented the skull of a species of small body and small brain named Homo floresiensis, commonly referred to as The Hobbit.

Luzonensis and floresiensis were both alive around 50,000 years ago – along with our species, Homo sapiens, our close relatives the Neanderthals, and a mysterious type of primitive human called the Denisovans.

As these groups roamed around Asia, occasionally breeding, the ancestors of the luzonensis and The Hobbit might, depending on nature, have been isolated on islands where the “likely shrinkage in response to limited resources”.

Scientists believe Luzonensis was even smaller than The Hobbit and less robust.

Teeth turned out to be another headache.

Archaeologists blown away by 2,000-year-old ruins in Hertfordshire [REPORT]
Stunned archaeologists at two sites of “national importance” [INSIGHT]
Archaeologists amazed by a thousand-year-old city under the lake [ANALYSIS]

This is what convinced the team that they had found an entirely new species.

The team, led by Florent Détroit, a paleoanthropologist at the Muséum national d’histoire naturelle in Paris, suggested that the culmination of their findings features at least two adults and a child.

Matthew Tocheri, a paleoanthropologist at Lakehead University in Thunder Bay, Canada, told Nature: “Together they make a strong case that this is something new.”

While the teeth have proven to be delicate, the shape of the floresiensis foot bones is distinct, most resembling that of Lucy, the Australopithecus, who is said to have never left Africa.

Curves in the toe bones and a finger bone of Luzonensis suggest that the species may have been skilled at climbing trees.

Mr. Detroit favors the idea that the new species descended from a group of Homo erectus whose bodies gradually evolved into different shapes than their ancestors.

Erectus is believed to be the first human relative to leave Africa around two million years ago.

Gerrit van den Bergh from the University of Wollongong in Australia told Nature: “You get different evolutionary pathways on the islands.

“You can imagine erectus arriving on islands like Luzon or Flores, and no longer need to indulge in endurance racing but must adapt to spend the night in the trees.”